I first read Sean Demory’s work when I noticed one of his stories on Ellen Datlow’s Honorable Mentions List 2012. “The Ballad of the Wayfaring Stranger and the Dead Man’s Whore” astounded me. It’s a rich and lyrical story that made me seek him out. It’s still available here on Amazon if you’re interested.
I’ve been lucky enough to read a few of his other stories and I think he’s a superb stylist. He demands a lot of the reader- he doesn’t coddle you – he’s on his own ride and you just have to try and keep up with him. I’m always curious to see what he’ll do next.
His work varies widely- Shakespearean fantasy, supernatural noir and now, with his new project, “Slow Boat to Fast City”, which he describes as raygun-gothic-pulp sci-fi. It’s a several-author anthology that he’s editing and Kickstarting.

Tell me more about Slow Boat to Fast City.
Sean Demory: “Slow Boat to Fast City” is an anthology set in a universe where the failed 1939 invasion of Earth by Mars was held off by a mobster with a head cold and where World War II ended with the capture of Adolf Hitler in his bunker on the Olympus Mons. It’s about people living in a frontier that’s one part Bugsy Siegel’s Las Vegas, one part Buck Rogers and one part Clanton and Earp-era Tombstone. It’s about layers of history grinding against each other until reality splinters and the tough men and women who have to make tough choices to deal with the wreckage.
It’s a crazy good time, and my stories are a big, big mash note to James Ellroy and Ray Bradbury.

What made you go for the short sharp burst of an anthology of only 6-8 stories?
SD: I like the potential of the ebook, and I want to explore it. To me, it seems that there’s a real focus on the big book, the seven-book-in-a-series horsechoker that makes you feel like you’ve gotten your money’s worth out of the reading experience. I love the ebook as a means to provide a short, discrete and self-contained experience. The stories are things that you can finish over a cup of coffee and keep with you for the rest of the day. That potential for story to enrich life organically is really exciting to me, and the form works well for old-school pulp science fiction.-

Tell me about the other contributors and their stories.
SD: I cringe when people talk about being blessed, because I’m a gritty, hard-as-nails fin de siècle nihilist… but I really am blessed and honored to have assembled the crew that I’ve got working on this. Orrin Grey (Never Bet the Devil), who combines Burroughs and noir for an amazingly evocative and emotionally rich locked-door mystery, “The House of Mars.” Steven G. Saunders has a story about Nazi holdouts in “Grüne Reich, Grüne Hölle” that’s just incendiary. A.E. Ash, an outstanding poet and author, takes a look at the alien within and the idea of alienness as a contagion in “War Paint.” Leslie Powell has a strangers-on-a-train road story, “You Send Me,” about a long-haul pilot and a Barsoomist rebel that’s atmospheric and funny and sad. Marshall Edwards’ piece is a story about a courier delivering an urn to a Chinese-American settlement in the hinterlands of Mars who rapidly finds that he’s over his head and in harm’s way.

Schlomo Saves the World, the first of the stories by yourself, is punchy and fast. What’s it about and how did Schlomo evolve?
SD: “Schlomo Saves the World” is sort of my mission statement. It’s about a gangster with a head cold and two bodies in the back of his delivery truck who finds himself in the middle of the Martian landing at Grover’s Mill, New Jersey and saves the world with a sneeze.
I wrote it right after I read Ellroy’s latest novel, “Perfidia,” and it shows. I’ve joked that the ur-Ellroy paragraph is “He said ‘Hello.’ She slapped him. Then she kissed him. Someone killed Kennedy. It wasn’t them.’” That being said, the man’s got a way with language that’s propulsive and immediate and so, so charged. I wanted the story to be almost percussive, as it’s written from the point of view of a guy who really doesn’t want much more in life than a good sandwich, a waitress with nice thighs and to be over this goddamned cold until he’s thrown into a world very different than what he’s used to handling. It worked out well.

The Martian had the bulk of a good-sized cow. Schlomo didn’t see it. His head was stuffed up and he was thinking of the mole over Doris’ right eyebrow and the mole on her collarbone and the mole on her hip and playing connect-the-dots again if he could ever kick this goddamned cold.
Schlomo was not thinking about the two bullethead welshing gonif sonsabitches in the back of his truck when he hit the Martian. They didn’t deserve much thought anymore. He’d done something to his shoulder when he’d killed them, so he was not looking forward to the digging. He could sink them in Carnegie Lake, maybe. Sink the bodies, drive back to Grover’s Mill and get Doris to baby him for a bit before the long drive back to the City.
The truck bucked when he rolled over the Martian. He could feel it begin to tip and pulled hard right to stay on the road. The truck shuddered, and he could feel the wheel jerk in his hands.
Bent axle, Schlomo thought as he heard bleating from the road. This fuckin’ day.

Why did you decide to use Kickstarter for this project?
SD: The piece is idiosyncratic in many, many regards and I really wanted to keep it as close to its original mission as possible. I also love how Kickstarter allows a less-known creator to build a rapport with an audience. The Kickstarter campaign allows the other authors to contribute without any real risk and lets the readers have some sweat equity in the process while becoming acquainted with some amazing writers.

I know that you’ve got cover art by Jeff Hui lined up, which I can’t reveal here, but I love the image you used on 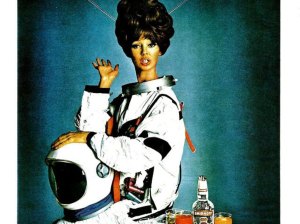 Kickstarter (left).
SD: Jeff Hui’s over is actually a fashion photo and it really hits the New Frontierish, Verve Records album cover in space feel that I wanted. Sometimes the universe sets things in your lap.
I was amazed at how many pictures popped up from a search of the word “spacegirl.” The photo I used for the Kickstarter campaign’s an old ad photo that’s just perfect… it’s so odd and of its time.

To read more about the project go to the Kickstarter page here.