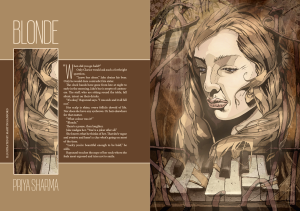 “When did you go bald?”
Only Clarice would ask such a forthright question.
“Leave her alone,” Jake drains his beer. Only he would dare contradict his sister.
The clock hands have gone from late at night to early in the morning. Jake’s bar is empty of customers. The staff, who are sitting round the table, fall silent, intent on their drinks.
“It’s okay,” Rapunzel says. “I was sick and it all fell out.”
Her scalp is shiny, every follicle devoid of life. Nor does she have any eyebrows. Or hair elsewhere for that matter.
“What colour was it?”
“Blonde.”
There’s a pause, then laughter.
Jake nudges her. “You’re a joker after all.”
She knows what he thinks of her. That she’s vague and evasive and hasn’t a clue what’s going on most of the time.
“Lucky you’re beautiful enough to be bald,” he adds.
Rapunzel touches the nape of her neck where she feels most exposed and tries not to smile.

From my story, “Blonde”, Issue 260 of Interzone, now available from TTA Press.

Thanks to Andy Cox for including this story.

Interzone’s sister magazine, Black Static is also out at the same time, and it promises to be a great issue with the line-up listed below.