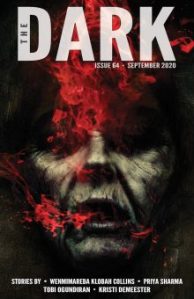 I am delighted to be included in The Dark this month. My thanks to editors Silvia Moreno-Garcia and Sean Wallace.

“Feral” was originally published in “The Porcupine Boy & Other Anthological Oddities” edited by Christopher Jones.

I am VERY happy to included in the wonderfully titled “The Porcupine Boy  & Other Anthological Oddities”, edited by Christopher Jones, which is out soon from Crossroad Press. The cool cover is by Natasha Alterici (cover art) and Deena Warner (cover design). 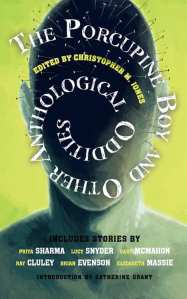 Table of Contents
Introduction by Catherine Grant
Outside by Gary McMahon
Feral by Priya Sharma
The Coldness of His Eye by Brian Evenson
The Porcupine Boy by Lucy A. Snyder
300 Down By Keith Minnion
The Dark Windmill by Janet Joyce Holden
It’s in the CardsBy Elizabeth Massie
Roadkill by Meryl Stenhouse
The Bone Arena by Jeffrey Thomas
…and Puppy Dog Tails by PD Cacek
The Exclusivity of Ravens by David Nickle
Thank You For Not Ignoring Me by Violet LeVoit
Jacqueline Laughs Last in the Gaslight by Paula Ashe
Adrenaline Junkies by Ray Cluley
Tagged Christopher Jones, Feral, The Porcupine Boy and Other Anthological Oddities
Leave a comment
Uncategorized

Thanks to Simon Bestwick for including me in his mini-interview series, What’s New?, with writers.  Find out What’s New? with me.