PS: Welcome Penny Jones. Congratulations on your collection with Black Shuck Shadows! Tell us about the themes and how it developed. 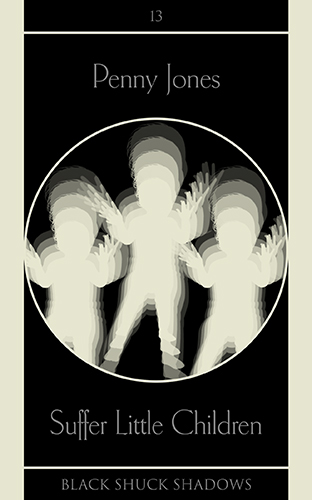 PJ: There are a couple of themes that run through the collection, one being mental health and the other being a loss of control. These two themes tend to be intrinsic in most of my writing, and I find that they crop up time and time again when my protagonist or antagonist in a story is a child. There is something naturally chaotic about a child’s control over their parents, whether it’s a toddler having a tantrum, or a teenager punching a hole in the door. But on the flip side to that, children exist in a state of constant helplessness, that veneer of control, an illusion. They can have their world turned upside down at the whim of their parents or guardians

PS: There are lots of precedents for “creepy” children in both horror and sci-fi literature and film. Do you have any particular favourites? Have any of them influenced your work?

PJ: It isn’t really creepy children that influence my work, although I love John Wyndham’s work it isn’t his portrayal of The Children in The Midwich Cuckoos that influences my work, it is the Colonel in The Day of the Triffids. “The men must work – the women must have babies.” This concept of women being used to repopulate the world and being forced to bear children, petrified me growing up (probably due in part to my father’s attempts to cure me of my childhood phobia of needles, by repeatedly telling me how many injections and blood tests I’d have to have once I got pregnant). It is this societal concept of a woman being nothing more than a vessel for a child, and that their life is somehow less worthy than the child’s that scares me more than anything else. I’m just glad that I was an adult before I knew about Margaret Atwood’s The Handmaids Tale.

PS: Why do you think we’re so disturbed by the child trope in horror?

PJ: There is definitely an element of the uncanny valley in why we find children so disturbing. We were one once, we should understand them, but we don’t. Everything about them is slightly altered to our norm as adults, from their large eyes, to their minuscule nails, nothing is quite in scale as to how it will be when they are grown, but they are still recognisably human. That very slight difference to their physicality is enough to trigger a response in us, it is supposed to, it is the trigger for the parental instinct. But it is also the same slight difference that freaks us out in mannequins, aliens, or antique Victorian dolls. Then there are the psychological differences, children are ruled by their Id. Their ego and superego developing over the years. They don’t have an understanding of their actions or the repercussions of them, they are reactionary. Until the age of about seven their only awareness is of their self. This is natural, a survival of the fittest trait, but it is still scary. I think back to incidents I witnessed growing up, bullies stabbing someone with a compass, fireworks lit and thrown at other children, someone being shoved into the road during an argument. Luckily none of these went badly wrong, but it was just that, luck. A centimetre to the right and that compass point would have pierced an eye, a second later the firework would have gone off in someone’s face, if the driver hadn’t slammed their breaks on in time.

PS: In some of your interviews you’ve talked about your exposure to the horror genre at a young age. Are there any traditional children’s books or shows that frightened or disturbed you at that time?

PJ: The scariest film I watched as a child must be Return to Oz, the whole concept of Dorothy being carted away for ECT because her aunty and uncle think she is either mad or lying about her time at Oz, and that they cannot cope with the sleepless nights and dreams that plague Dorothy following her time there, would be horrifying in any 18 certificate film, let alone a children’s film. The line “They’re patients who’ve been damaged, locked in the cellar.” still haunts me today. To put it in perspective I watched both Return to Oz, and An American Werewolf in London when I was six, and Return to Oz was by far the scariest. I have rewatched both films as an adult and I would still say Return to Oz is the scarier film of the two.

PS: What do you think of current YA/children’s books in terms of their darker, more adult themes?

PJ: I’m all for them. Of current YA books I’m particularly enjoying Miss Peregrine’s Home for Peculiar Children by Ransom Riggs. I think there have always been dark, adult themes in YA and children’s fiction, when I was growing up one of my favourites was Grinny by Nicholas Fisk which my parents gave me to read when I was about eight, before I moved on to reading Point Horror, Nightmare Inn and other stories where gore and mysterious boys were the majority of the plot. It is a safe way for children to explore adult behaviours, and to be aware of the choices and decisions that they’ll face as they get older. YA and children’s books have always been around, and have always veered towards the darker side of human nature, whether it’s Charlotte Brontë’s Jane Eyre, or the Grimm’s fairytales.

PS: Do you have a personal favourite in the Black Shuck Shadows series?

PJ: Yes. Phil Sloman’s Broken on the Inside is amazing, I love the subtlety in his writing. Again it’s that uncanny valley of something being just slightly off, a dissonance in his stories which is beautiful.

PS: Do you have any advice for writers putting together their first collection?

PJ: Think about how your stories work together as a whole. Even if your first collection isn’t a themed collection, your stories need to work together. You could have the best short stories ever written, but if they don’t fit together, if the flow isn’t there, you don’t have a collection.

Contents: Beneath Still Waters / The Changeling / Swansong / Swimming Out to Sea / It’s Not Just How Beautiful They Are / Waxing

Penny Jones knew she was a writer when she started to talk about herself in the third person (her family knew when Santa bought her a typewriter for Christmas). She loves reading and will read pretty much anything you put in front of her, but her favourite authors are Stephen King, Shirley Jackson and John Wyndham. In fact Penny only got into writing to buy books, when she realised that there wasn’t that much money in writing she stayed for the cake.

Black Shuck Books is an independent publisher based in Kent, launched in 2015 by Steve J Shaw. Black Shuck Shadows is his range of pocket sized horror.