Lily was unprepared for the anarchy of the hunt. The howling, scrambling of the pack. The tally-ho. The hue and cry. The thunder of the ride. Hooves churned the earth, great clods thrown into the air. Pike goaded her mare with his crop. He didn’t want to miss the fun.

She caught the flash of red upon the hill and wished it Godspeed, but it wasn’t to be. They chased the vixen to exhaustion. Lily didn’t see the kill. Unfortunately, with Pike’s help, she arrived in time to see the trophies taken. The mask, the pads, the glorious brush. Lily appalled them with her squeamishness. This fox, this monarch of the field and copse, had been a stunner. Now she was tossed and torn apart at the frothy jaws of mere dogs.

This story started with a girl walking up an overgrown lane towards a decaying stately home. Inside there’s a man who can help her transform into what she needs to be. I imagined a scientist doing bizarre experiments but before I knew it I was writing my own take on a shapeshifting tale. I like it when a story takes you off in its own direction.

“The Fox Maiden” originally appeared in the Summer 2011 edition of On Spec. Thanks to Cat McDonald, their copy editor, who taught me a lot with a few incisive comments. It’s been reprinted in Paula Guran’s Year’s Best Dark Fantasy and Horror: 2012 . It also made Ellen Datlow’s Honorable Mentions for The Best Horror of the Year 4.

Prime Books have interviewed many of the contributors to The Year’s Best Dark Fantasy and Horror. My interview can be read here. 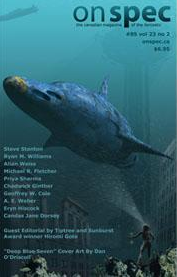 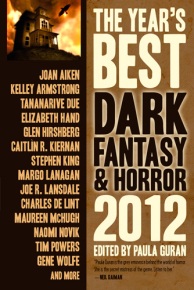 Guran’s third annual retrospective anthology offers a wide-ranging variety of fantasy and horror stories by new and established writers. In Catherynne M. Valente’s “The Bread We Eat in Dreams,” a demon falls in love with a small town and seduces it with her baking. In Joe R. Lansdale’s “The Bleeding Shadow,” a musician finds that selling his soul to play the blues is only the beginning of his supernatural problems. Caitlín R. Kiernan’s “The Maltese Unicorn” is a noir fantasy about a demon and a madam vying over an obscene artifact, while Norman Partridge pours the lawlessness and vast unknown of the American frontier into the horrific underground vampire city of “Vampire Lake”. Naomi Novik, Tanith Lee, and Priya Sharma all contribute vivid, memorable stories that depend less on plot than magnificent world-building and atmosphere… Publishers Weekly